With the industry blossoming globally, it has never been easier to find high-quality cannabis and a bong to smoke it with. Most cannabis enthusiasts have shopped at their fair share of specialty stores, head shops, and online retailers like Zamnesia. Even more casual smokers out there have likely seen a decent bit of crazy bongs and colorful pipes on display shelves, enticing all who walk in. There’s no denying the incredible feeling you get when you take a hit out of a hand-blown, genuine piece of glass art. 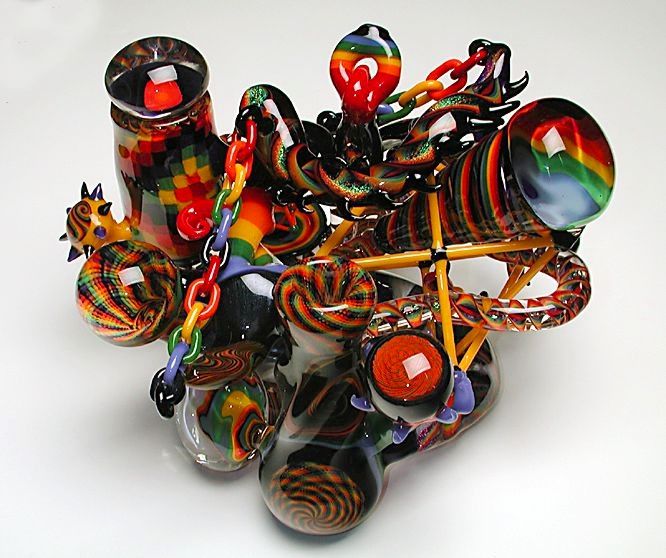 Whether it’s a strange geometric shape with a funky color scheme or an elaborate bubbler in the likeness of your favorite cartoon character, there’s a surplus of fantastic glass bongs out there for all to enjoy. However, the craziest bongs you could ever hope to see in your life are not to be found in regular old corner stores and head shops. As has been used repeatedly in related headlines, many museums and art galleries acworldwideave begun bringing new meaning to the words ‘high art’ by rolling out exhibits dedicated to some of the most beautifully designed glass bongs the world has ever seen.

Not Just For Smoking Anymore

The National Liberty Museum of Philadelphia presented an exhibit called The Treachery of Images in May 2017, which displayed some works by the finest glassblowers in the United States. These beautiful pieces of glass are no longer straightforward smoking devices but rather prized works of creative craftsmanship to be cherished and admired. For example, one of the exhibit’s water pipes bears a striking resemblance to a fiery orange dragon. Glaring and snarling, this crazy bong is one of fifty brought to the museum. In New York, Grey Space Art is the first gallery to open up purely to showcase glass art. Unless you’ve got the funds, though, you’ll only be admiring when seeing exhibits such as these—all the crazy bongs on display at Grey Space Art range from 20,000$ to 300,000.